From 11th to 13th October 2013 ‘LEARNACT’ actors met for the 1st working meeting in Berlin at ‘Gartenstudio Berlin’ …and got into the contact while having a snack. 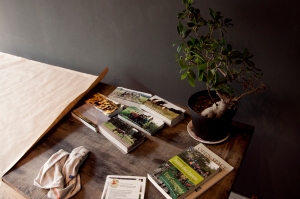 After that, we had discussions in small groups and presentations of result in plenary.

Afterwards we developed the working topic for the next day – ‘To create the garden with sustainable soil and social inclusion’.

While some people kept on discussing in an informal context, 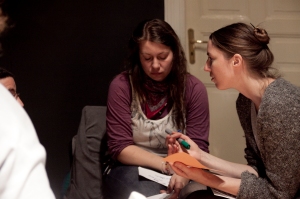 some people started cooking together 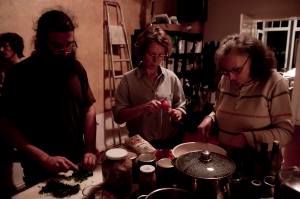 and preparing some other things.. 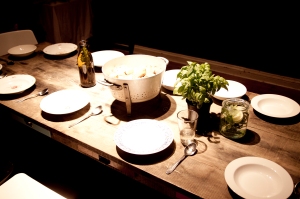 Dinner was cooked with ingredients from the local CSA (Community Supported Agriculture) of ‘Luchgärtnerei’. The exchange continued while eating together… 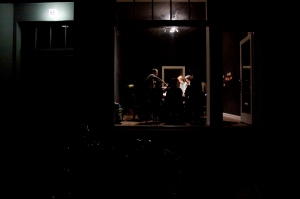 The second day the group met at the space of ‘SpreeAcker’. 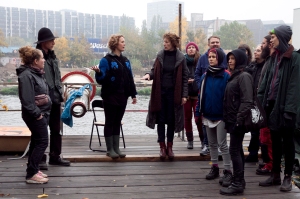 Afterwards participants went to see the neighbouring projects ‘Teepee’ and ‘Eisfabrik’, so that they got an idea about the area…

After the introduction in to the project made by Lina Jukonyte, participants updated and developed the project. Agreements concerning the communication, evaluation, website ect. were made. 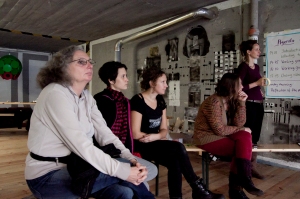 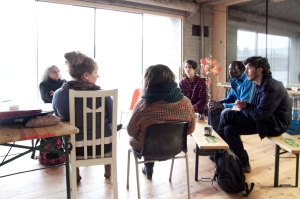 and practicing principles of ‘Open Space’…..

The day ended with the dinner served from ‘Guerilla Kochlounge’, small concert and informal and private discussion with guests from other community garden initiatives and cooperating projects. And of cource with dance! 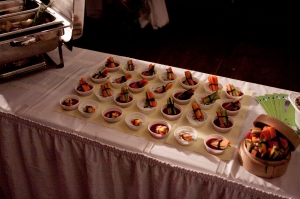 The last day of the meeting started with watching a documentary about the ‘Open Space’ movement worldwide.

Afterward the method ‘Open Space’ and the experiences made during its testing session were reflected and evaluated and results in plenary exchanged. 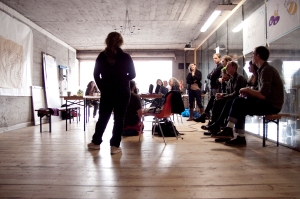 Following the evaluation on whole meeting  was done…

The most surprising thing that happened to me during the workshop was:

The visit of ‘Teepee’ – Village…..       The freedom of ‘Open Space’ method…  Feeling of being completely right and good…..    The great group-dynamic, cooperation within the group, trust in each other, exchange….  Discovering of diversity of gardens in Berlin…

Recognition, that there are a lot of approaches for facing the same problem…. Talk less, go practical!… That I can not control everything. That what ever happens is okay!…. The low of two feet! …..  Open Space…. All interesting discussions, exchange, experiences made and impressions gotten will impact positively my future way of life!…. Similarities concerning the challenges which gardening projects are facing in different european countries…. When people bring a lot of motivation and passion, then it is possible to move things toward!  The garden is itself a part of sustainable development…   Ecological, social and economical dimensions should be developed in a way, that next generation still can live in a human way… Things have to make changes. Or we will destruct ourselves….  To create long-term and permanent relations in order to develop together things and to work together…

Some statements to organizers:

Let make next time something, what will remain – to plant a tree – for example!    …   Well done – impressive organization – good job! …   Make plans for more rests in the schedule!  …  1001 times THANK YOU VERY WELL dear Lina’s!   ….   Your are amazing. Keep it what you do!  ….   I didn’t catch the point of the project: Is it about gardens? Culture? Learning? Science?   …  Very good planing! Great people! Nice gardens! Good food! …. More practical sessions!

Photos of the event were made by Uta Oettel.

For more information on the method ‘Open Space’ please check:

With support of the European Commission